German card translations are a sad affair. They are riddled with clumsy translations, especially in the card names. It’s not such a great idea to translate english card names 1:1. The rules texts are translated sanely, i.e. using special German templates, although some of the template choices are a bit strange and more verbose than needed. For example, “target” is translates as “deiner Wahl” (“of your choice”), while “of your choice” is translated with “die du bestimmst” (“that you choose”).

In Planar Chaos Ovinize was translated as “Verhammelung”. First of all this sounds strange. The noun “Hammel” was turned in the verb “verhammeln”, which was turned back into the noun “Verhammelung”. But it’s also not good templating. Ovinize is an Instant, and Instants and Sorceries usually get a verb as name. Ovinize is a verb. The German translation “Verhammelung” on the other hand is a noun. This shows a lack of understanding of magic card naming on the part of the translator. “Verhammeln” or “Schafen” had been a much better name.

But what’s worse are wrong translations. For example the German version of Necrotic Sliver has the following ability: “All Slivers have ‘3, Sacrifice this creature: Sacrifice target permanent.'” (You can only sacrifice your own permanents.) Since Wizards decided not to publish Oracle texts until Monday after the prerelease, I could not confirm that the card was actually a mistranslation and had to rule it by its German text. Unfortunately the mistranslations (in the rules text) average around one per expansion.

Finally, cards that have obvious templating problems in the original are not corrected in the German version. For example the flip side of Saviours of Kamigawa’s Erayo, Soratami Ascendant reads “Counter the first spell played by each opponent each turn”, a rather obvious templating error. This was unfortunately not corrected in the German translation. In my opinion a good translator should catch errors like this. 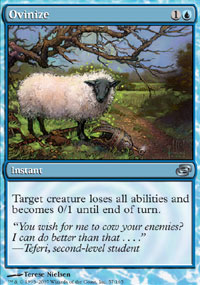 Collin Winter blogs about an updated unittest module he wrote. His update fixes the internal structure, and therefore the expandability, of the module, but also cleans up the external API. There are still a few minor improvements I would like to see, but nevertheless I hope that his updated version will be included in Python’s standard library eventually.

I don’t like Java’s File API. It’s main problem is that is mixes several responsibilities into one class. One responsibility is handling of “abstract” file and path names, i.e. operating system independent file names. The other responsibilities are all file system related: Querying file meta information (access rights, access times, file type), creating files, and listing directory contents. In my opinion these should be clearly separated.

I am also missing a constructor or construction method that creates a File instance from a list of path components like this:

Maybe I should start a Java warts page, similar to my Python warts page …