Penalties are supposed to be upgraded when a certain offence is repeated during a tournament. In small tournaments with only few judges that works well, since all judges communicate efficiently (in German we would say: “sie tratschen wie Waschweiber”). But the larger the tournament gets the more difficult it gets to learn about previous penalties.

Normally a repeat offence is only noticed after the match of a player is already over and the result is entered into DCIR. At this point it’s already to late to upgrade the penalty. Also at really large tournaments the scorekeeper is not able to enter all the penalties during the round.

There are multiple possible solutions to this problem. Please keep in mind that repeat offences during a match are normally not a problem, since these are usually noted down on the result entry slip and the opponent tends to remember them as well.

I will suggest that we experiment with the different methods at our next events and I know that others from #mtgjudge will as well. I think I will suggest a mix up the latter two methods since that seems to be the most feasible. If I remember I will report back on my experiences at this place. If you have any other methods or comments, please let me know.

Since the Wizards page is back up, I can confirm that my judge article about the Rodgau PTQs “between the years” is really up.

Here are some more pictures from that event.

Update: One thing that wasn’t presented well in the article was how bad I was feeling during the whole tournament. At the evening before the first tournament, I agreed to fetch some friends from the train station. So I walked through the cold rain towards the station that consisted just of the platform with two small shelters. On my way there I got a call that they had just missed their train and would arrive 20 minutes later. So I waited for 20 minutes when I got a second call that the train had been cancelled and they would arrive another 20 minutes later. So I was out in the cold for more than an hour and this is probably when I got a severe cold.

This cold didn’t make itself felt until the next evening, though. While calling the draft I suddenly started to feel really bad. At this point I though it was food poisoning from the pizza I had eaten earlier. During the night I had to run to the bathroom multiple times and was generally feeling very bad.

The next day I only had herbal tea for breakfast and felt very weak, but not really ill anymore, so I though I had it all behind me. I did not eat properly this day and when I went to bed, I got chest pains. In the morning the chest pains had grown stronger and I had a slight headache. So I took an Aspirin against the headache. It worked and after a healthy breakfast my chest pains had gone as well. I didn’t come to the obvious conclusion that this was the because of the painkiller, though …

So later in the day (I was team leading), the chest pains grew stronger again and I had to sit down early and was felling ill. So I wasn’t able to lead my team as much as I would have liked to. Fortunately they were experienced and didn’t need much help.

flame- told me earlier on #mtgjudge that my judge report is finally up at the DCI page. Unfortunately that page is currently down. So I have to wait a little bit longer …

The judges of GP Leipzig: 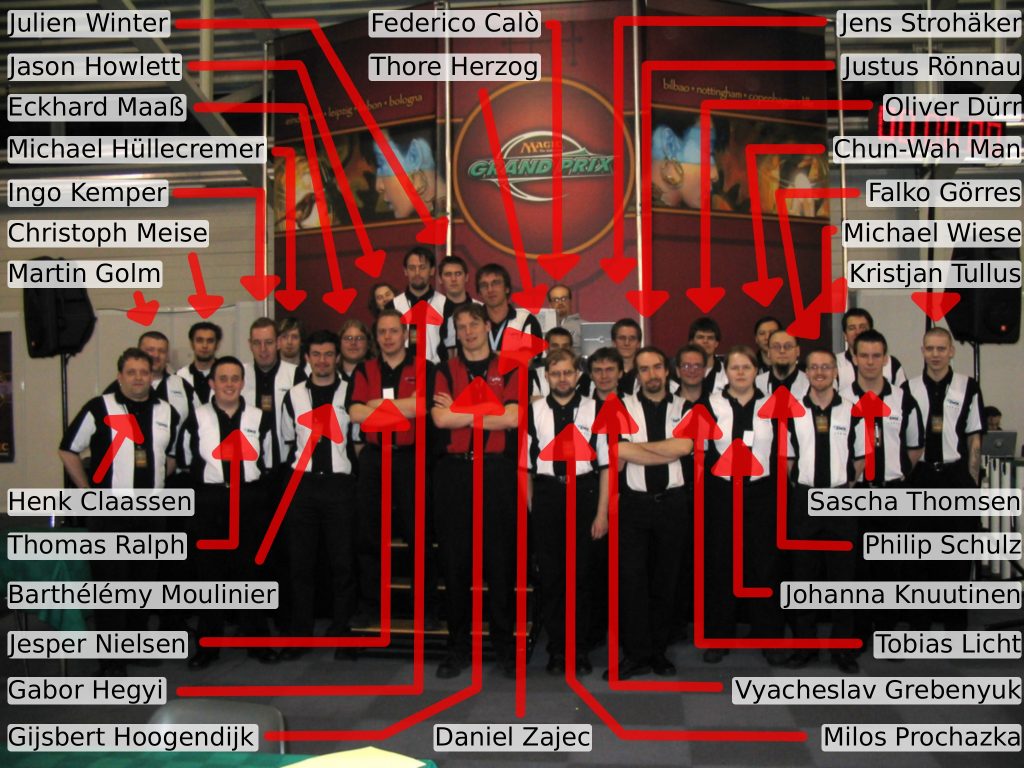 This picture is from flame-‘s blog. I added the names with the help of flame- and other members of #mtgjudge. Thanks all! Missing on this picture are at least MJH, Thomas Kugler, and Martin Damen.

Finally the GP Eindhoven where I top 8’ed is in my rating. And my constructed rating is now up to a whopping 1691. Funny thing is that this is higher than my limited rating (although that is admittedly not too hard) and I see myself more as a limited player. But maybe that will change again when the results from GP Leipzig are in.

I came back from Grand Prix Leipzig yesterday evening. A friend had asked me not to judge at this event, so I did her the favor and did play instead. Day 1 competition was split into two separate events, head-judged by Jesper Nielsen and Gis Hoogendjik respectively. The layout of the tournament site was suited very well for this event, since it consisted of two big halls, joined by a smaller hall so that each event was held in a separate hall.

I went 5-4, which surprisingly wasn’t enough to make day 2. So instead I chatted with a lot of people, mostly with other judges. I met Johanna Knuutinen (flame-) from Finland for the first time. I also chatted a bit with Jasper Overman (Mercator) from the Netherlands and Thomas Ralph (Island) from Ireland, who I had only briefly met at Grand Prix Vienna before. Finally there were many German judges present, most of whom I know from other German events, like the Rodgau PTQs at the end of 2004. Johanna and Thomas also brought me Euro coins from their home countries, which I will hand on to my colleague Nicole, who collects them.

I am glad that one of the local Berlin players, Rosario Maij, made the finals of the Grand Prix. He is a nice guy and someone who has really earned success at this level. Also, Gabriel Huber, who joined us on our ride to Leipzig passed his L1 judge test. Congrats to both of them!

Today was the first day of play of this year’s German Magic League. My team Istari 2 played host for three other teams. We played at the Magic Center here in Berlin, where the other two teams of my league were also playing. Since one of my teammates, Frank, who was scheduled to play Block cancelled yesterday, I had to play and couldn’t judge. Fortunately Sascha Wagner, an employee of the Magic Center, member of Team Karl Marx (TKM), and a level 2 judge himself took over judge duties for all matches today.

We won against the Beastmasters, drew against TKM 1, and lost against the Heldenwelt Titanen from Magdeburg. This was an okay start, although Constructed didn’t run as well as we hoped. The red-white Samurai deck I played in the Kamigawa Block Constructed slot won against a Honden deck, but lost against a green-white aggro control deck as well as a red-black control deck. But I don’t feel too bad about it, especially since the latter matchup is basically an auto-loss. But in retrospect I blame myself for not sticking with the green-black deck that I planned to play and instead taking the Samurai deck that we had prepared for Frank.

In other news, I’m still not listed as a level 2 judge, the tournament where I made top 4 is still listed as “cancelled”, and finally (and most importantly) the judge article that I submitted at the beginning of january is still not posted. Frustrating …

This is an excerpt from an e-mail message that I sent to Magic rules manager John Carter a while back. It outlines the problems I have with the way the Bushido mechanic currently works. Maybe other people find it interesting as well.

502.38a Bushido is a triggered ability. “Bushido X” means “Whenever this creature blocks or becomes blocked, it gets +X/+X until end of turn.” (See rule 309, “Declare Blockers Step.”)

502.38b The bushido bonus is calculated only once per combat, when the triggered ability resolves. Adding or removing blockers later in combat won’t change the bonus.

I have problems to understand how 502.38b works. Assuming I attack with a creature with “Bushido 1” which gets blocked. According to 502.38a I would expect that a triggered ability with the effect “This gets +1/+1 until end of turn.” would go on the stack. According to 502.38b this reads more like: “This gets +X/+X, where X is the the number in the Bushido ability of this creature.” Since the bonus is calculated on resolution, the effect tries to “look back” at what the current Bushido value is — it has to remember from which ability it triggered, in case the permanent from which it triggered has multiple bushido abilities. I think this is the first time, an ability on the stack does not only need to remember its source (in this case the permanent from which it triggered), but also the specific ability.

I’m unsure how this interacts for example with Humble. If my opponent plays humble on my bushido creature in response to the bushido trigger, what bonus will my creature get? +0/+0 since the creature doesn’t have the Bushido ability anymore? +1/+1? This would contradict the statement that the bonus is calculated on resolution. Will it use the ability’s “Last Known Information”? I don’t think so, since there is no such thing for non-permanents.

Fumiko the Lowblood has bushido X, where X is the number of attacking creatures.

Creatures your opponents control attack each turn if able.

So, if I attack with Fumiko and two Grizzly Bears, Fumiko gets blocked, and one of the Bears is Shock’ed what exactly happens? According to the FAQ the outcome is that Fumiko will get +2/+2. I see three possible interpretations:

To me it seems as if the rules try to mimic the ability “Whenever Fumiko blocks or becomes blocked, it gets +X/+X until end of turn, where X is the number of attacking creatures.” But in my opinion, this just doesn’t work with the rules as they currently are. I would prefer if the Bushido bonus gets “locked in” when the ability triggers, as this seems to me to be most straight-forward and most consistent with other, similar rules.

Yesterday saw a new Netatalk package (2.0.2-2), since I forgot to include heimdal-dev in the build dependencies. Today another fix is needed (2.0.2-3), since it doesn’t build on amd64. I don’t expect this to be the last build failure. Let’s wait and see …

Of course I would prefer to check in the build fixes into upstream CVS, but due to my current problems with Sourceforge CVS I can’t.